So, I guess the next few posts will look like a journal.  Each entry begins with the date and time and each entry ends with the time.  I wanted people to have a sense of chronological order…. I’m anal that way.  Our story starts here, and then here. One thing I noticed today is that I’m back to craving my privacy.  Poor DH.  During the power outage I was insistent on having all the window blinds open, you know, to try and maximize the light available to us.  Now, I am back to needing them closed so that the people next door can’t look in…. Back to normal~!

… and the storm continues.  Day 1 or 2, depending on how you count your days.  The 30th is the first full day of no power:

10/30/2012, 10:25am…. Well, I pretty much lost last night’s post that I typed into my ipad.  I am working on the WordPress ipad app and somehow have lost my post from last night.  I cannot publish because we have no power, and being that everything gets saved (or I thought that) and thought my last entry would be saved, but no.  WTF? Sigh…. unless, when the power comes back, something miraculous happens.  (Just to be clear, there were no miracles.)  So pissed, but at least what is on my laptop is still there.  So to move on…. 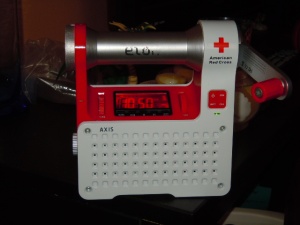 Tomorrow is Halloween and I’m wondering if we will have one.  At least, I’m hoping, that the kids will have a little party or something at school.  Keeping my fingers crossed.  I’m listening to CBS radio.  Thank God for radio.  Thank God for a husband who is pretty much a radio geek.  He knows almost all of the stations and their genre.  Because of him we have two battery operated radios and one of them (above) has a crank to power it up when there’s no more batteries.  I’m thinking of those who do not have these hand held wonders… Oops, now he’s shut it off and I’m left to my own thoughts unless he starts talking about something.  (NJ101.5 was my Godsend.  We listened to them and CBS AM, I think, the whole time.  Radio, the only source of information.) 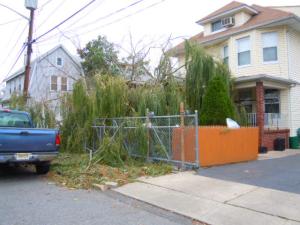 Went out for a walk this morning and aside for one house, this block was virtually untouched, except for the loss of power.  One house, though, has a relatively medium sized Weeping Willow tree down in it’s front yard blocking the whole front of the house.  The kicker is that this is a neighbor’s tree and not theirs…. bummer.  (To date, this tree is still right there in the yard.)  Took a walk around the block and saw lots of garbage scattered around which just seems to be an bit of an exaggeration of how people really don’t care because it doesn’t look all that much different from any other day except that today there are lots of shingles in the mix.  I saw a couple of other trees down on houses and in the streets around us; but hubby came back from his walk with tales of several more trees down, including an Methodist Church with a tree resting on it’s roof.  This is the place hubby takes our son when he needs to have a “talk” with him-They go sit on the steps. Sad. 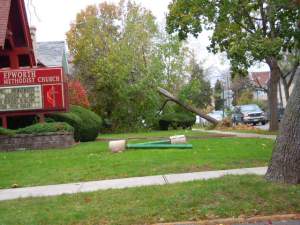 I am struck by how much we take for granted.  Power, lights, TV, and yes, the internet.  I am almost lost and certainly disappointed that I can’t publish right away; and now I’m itching in my seat that I can’t go online to get the news about the area and the storm, pictures, whatnot.  Oh well, just deal with it.  I was remiss and did not charge my phone before the power went out.  At last look by the indicator, it had most of it’s charge.  This morning I went to call some family and it died…. Cripes, now that I finally have a cell phone, I can’t use it.  Just as well to stay isolated as I didn’t check for facebook and twitter txt codes that would have allowed me to at least make updates about us.  Again, deal. (As an update, there were places I could go to charge whatever I needed to charge.  The library, All About Ewe, Dunkin Donuts, and the 1st Presbyterian Church in Roselle, NJ.)….. 11:04am.

12:15pm… Just finished our lunch/dinner.  Cooked up remainder of hamburgers and left over grilled chicken.  Raw celery for veggie and finished up the cheddar cheese from last night and munched on some peanuts.  Something interesting.  Outside temps are not particularly hot or cold which is good as far as the ability to keep comfortable, which I am feeling comfortable.  BUT the warmer temps for this time of year is not helping the refrigerator as it’s not even 24 hours since the power went out and it’s already creeping on up, getting on the warm side.  Not good for food OR my two little trays of ice which I totally need for drinking my water.  I have four bags of chopped figs in there and I just hope that it lasts so that I can make those fig cookies I’ve been fawning over since the last post or so. (Figs are now back in the freezer, but I seriously need to make sure they’re okay to use in baking.)

The boy is really beginning to annoy me right about now.  Such a strong stubbornness he has.  grrrrr.  Well, for today.  I’m going to try an do some knitting after taking some Advil.  My arm was killing me last night and could not do much.  Today might try plying some yarn in the daylight and also reading, of course.  Still very cloudy and rainy outside, so not much light coming inside the windows.  Really wondering about my brother’s family because they live on Long Island, NY.  Great.  Hubby’s cell phone is charged, but doesn’t have service.  Thank you, Consumer Cellular… You SUCK.

I wish I could get news about our city, Elizabeth, NJ.  While I am interested in what is happening over in NY, I feel so isolated not knowing what is going on in my own area, Elizabeth and Union County, in general.  iPad charge is down to 47%, so will break now….. 12:39pm

6:06pm… A bit of an update.  Spent the whole day with a dead cell phone, when about an hour ago I realized I could charge it in the car.  DUH… Tried to call family but none answered except for my SiL’s cell and left a msg… No other phones answered.  Did manage to get a txt msg through, but only to one person and she is also a tracfone customer.  Verizon Wireless customers which is my whole family, was down.  Tracfone trumps Verizon Wireless…HA.

Just heard that power is not expected to come back on until Monday, at the earliest. This is a good six days from now… WTF?  Praying that it’s not that long of a wait. Last year after Irene, we got power back way before they said, so I’m hoping it will be the same this time.  Still, I’ve got to feel blessed.  I have a home to sit in, reading or whatever preferred mundane occupation.  A lot of people out there are in shelters or have nothing… or worse, still can’t escape the flood waters.  My enemy is boredom, how lucky am I?  I am hearing generators around me, but I’m thinking that a couple of more days, if not sooner, and even those will be silenced as there are no gas stations around here with power.  (Just for the record, the generators around us kept on until the very end…. the noise was deafening to my ears!)  Tomorrow I think I’ll go to make sure a friend of mine is okay.  Can’t call her, but she’s only a few blocks away.  Don’t think I can charge my ipad in the car, tho~or laptop~42% 6:19pm.